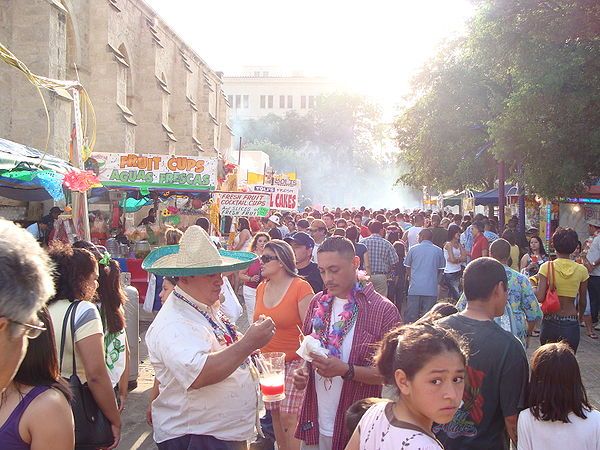 The Battle of Flowers Parade is the event that launched San Antonio’s Fiesta. In 1891, a group of ladies decorated horse-drawn carriages to parade in front of the Alamo and showered each other with flower blossoms. The Parade was organized to honor the heroes from the battles of the Alamo and San Jacinto.

The modern parade showcases Texas’ diverse cultures and landscapes, arts and industries, and experiences and historic events. You’ll also get to see spectacular floats carrying costumed Fiesta royalty. Come to this wonderful family event prepared to shout at the passing floats, “Show me your shoes!”

The festival first began in 1891, when local women used to decorate baby buggies, carriages with live flowers. The fiesta battle of flowers parade route required reaching the Alamo and throwing flowers at each other, hence the term ‘Battle of Flowers’. With time, several other activities joined in as well such as parties, balls, and a carnival. Furthermore, the festival has undergone several name changes as well until it was finally named Fiesta San Antonio in 1961.

In 1985, the Battle of Flowers Association began crowing a carnival queen. As a result, in 1909 John Carrington who was a local businessman established the Order of the Alamo, the purpose of which was to crown a queen along with a princess and 24 duchesses. 12 of these women belonged to San Antonio, whereas 12 were outsiders. Lastly, the fiesta battle of flowers parade tickets are not required as anyone can participate in the festival.

The Battle of Flowers happens to be the oldest festival in San Antonio, which is organized entirely by women. It is an immensely popular event that manages to attract approximately 350,000 people on the second Friday of Fiesta. Furthermore, it also the only event in the United States that is held by women, and all of them are volunteers.

Moreover, the battle of the flowers parade time is sunset. Assisted by the Army National Guard, the women on the day of the festival dress up in yellow and wear yellow hats a well. Moreover, many local schools to allow the kids and parents to enjoy the festival do not hold classes. San Antonio parade of flowers is considered a holiday so that everyone is free to celebrate the festival.

Will it be hot outside?
It’s late April, it’s Texas, and the parade gets rolling at 12:45 p.m., so you’ll definitely want to prepare for the heat. Put on sunscreen and a hat, carry with you bottled water and sunglasses. If you’re the type to carry an umbrella for shade, now’s a good time to do so. It’s likely you’ll spend three hours out in the sun, between getting to your spot and watching the parade. If you’re out on the bleachers at Broadway and Jones – not a bad vantage point for the parade – you’ll want to be particularly attentive to these tips, as shade will not be happening for you.

Where can I find shade?
Though you may find some pockets of shade along the turn (on 3rd Street, as the parade shifts from Broadway to Alamo), the surest bet is the north side of Commerce Street between Soledad and St. Mary’s. Thanks to the Aztec Theater and connecting buildings, those seats are shaded. The seats on the south side of Commerce, however, get as much sun as most of the parade route gets. One drawback with the shady seats is they’re located toward the end of the parade route. If you’re looking for your bands and marchers to be extra-peppy, you want to be closer to the starting point at Broadway and Grayson.

What about food?
Vendors sell a variety of festival foods along the parade route, but many families take their own food to the parade. Leave room for the famous San Antonio Raspas (snowcones), which will be available from an abundance of street vendors. You can also find roasted corn in abundance and many other varieties of food. If you have time beforehand, and if your seats are along Commerce, you can always duck down to the River Walk for lunch. The restaurants, though not overwhelmed, do brisk business prior to the parade.

How do I get the royals to show me their shoes?
Just ask. In fact, one of the principal occasions for audience participation at the Parade is calling out to the passing floats, asking the waving women to display their footwear. Most of them, under beautiful gowns, are wearing tennis shoes or flip-flops for comfort.

In 2015, UNESCO had termed the San Antonio Missions as the UNESCO World Heritage Site. It was the first of its kind in Texas at the time. The five missions including the Alamo were built back in the early 1700s. Today, these missions tend to be one of the most attractive destinations in San Antonio. While visiting the city, make sure to check out the Mission San Jose, Alamo, and Mission Concepcion. Although most people tend to drive between the mission but biking is possible too. Biking is a great way to explore the area and enjoy the scenery while grasping as much information as possible.

The Roman Catholic San Fernando Cathedral is famous for being the burial site of the heroes of the Alamos. It happens to be one of the oldest cathedrals situated in the United States. However, that is not it. At night, the cathedral turns into what is known as San Antonio The Saga. There is no charge or a ticket to attend the event, which is held every Tuesday, Friday, Saturday, and Sunday evening. Furthermore, it is a 24-minute video created by Xavier de Richemont featuring choreographed narration and music. If you are bored at night in San Antonio, this is the place where you need to be.

If you were to step a little outside San Antonio, you will come across Natural Bridge Caverns that are the largest commercial caves in Texas. It is just a 30-minute drive from San Antonio. Apart from featuring interesting formations, these caves include huge rooms with narrow passages. Furthermore, two types of cave tours are offered that are approximately 70-minute each. However, it is not just the caves that you will be entertained by but also ziplines, the Canopy Challenge, and ladders 60 feet above the ground. Kids can experience gem and fossil mining as well while having the chance to find some gems on their own.

The Peal not only happens to be a historic district of San Antonio but trendy as well. This district features unique shops, restored buildings, and carries a reputation for hip restaurants and great cuisine. Moreover, on the weekends, the local farmers gather and setup a vegetable market that includes fresh sauces, foods, and other specialties. While restaurants are one thing in the Pearl district, the environment is another. It is not only about enjoying delicious cuisines but the vibe as well.

The Historic Market Square is famous for souvenirs and unique items. It is a three-block area, which consists of restaurants and shops selling extraordinary items. It is also the largest Mexican market in the United States. Locally owned shops sell handicrafts to all kinds of interesting items such as ponchos, jewelry, shoes, blankets, and musical instruments. Once you are done shopping, do visit the Mi Tierra Café Y Panaderia, which is famous for its lunch as well as the bakery. This restaurant opened in 1941 and since has been run by the Cortez family. Moreover, this restaurant is open 24 hours a day and is always decorated with lightings and flags, etc.

San Antonio Museum of Art and the McNay Art Museum

The San Antonio Museum of Art and the McNay Art Museum are two separate locations that offer two different perspectives. While the San Antonio Museum of Art includes and displays Roman and Greek antiques along with American, European, and Asian art. The McNay Art Museum on the other hand features a huge collection of contemporary Indian art along with modern art. These museums are a great way to spend some time with your family, exploring historical artifacts unknown to the rest of the world.

San Antonio is one of the most happening destinations in the world. One can say it never sleeps. From splendid landmarks to colorful festivals, you just can’t get enough of it. When planning to visit San Antonio, make sure you visit at the right time so that you do not miss out on the most important events. And yes, do not forget to check out the top attractions mentioned above.