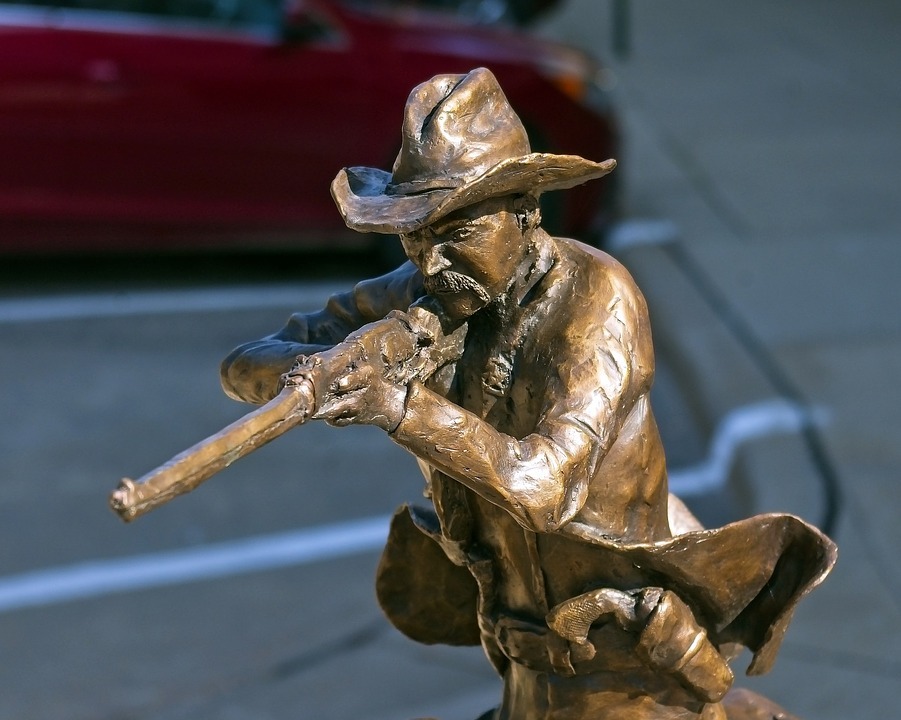 If you would ask people about the Texas Rangers, probably the first thing that will come to mind is the baseball team. But before them, Texas Rangers were most widely known as the oldest state law enforcement agency in North America. The Rangers have a heritage that started with the earliest settlements in Texas, and has been compared to other world-famous law enforcement agencies like the FBI, Royal Canadian Mounted Police, and Scotland Yard.

Since they date back to the 1800s, scores of books and well-researched works to pulp fiction novels have been written about them. The Rangers have also inspired a lot of movies, television and radio shows over history.

The Rangers are part of the history of the Old West, and as the years passed by, the distinct Ranger tradition has evolved.

After his father died, Stephen F. Austin assumed his father’s contract as empresario, or developer of settlements in the Mexican province of Tejas. His colony, and those proposed by other empresarios, would serve to reinforce Mexico’s claim to Texas and act as a buffer between the Hispanic settlements and the hostile Comanche Indians.

By 1823, the settlements were frequently raided by the Comanche, Karankawa, and Tonkawa Indians. Under Mexican law, Austin was authorized to form a militia to ward of the Indians, patrol against intruders and capture criminals. He called for ten men to act as rangers for common defense. And these men were known as the first ancestors of the modern Texas Rangers.

During that time, companies of men volunteered and disbanded as needed. Anglos, American Indians, and Hispanics served in all ranks from private to captain. While most were born in the American South, many hailed were also from England, Germany, Scotland, and Ireland.

Early Rangers used Spanish pistols, Tennessee and Kentucky rifles, and Bowie knives made in England. They all rode swift Mexican ponies. Their law enforcement tactics and tools were suited to the rugged frontier, and each Ranger provided their own horses and equipment.

One of the most famous early Texas Rangers was John Coffee “Jack” Hays. In 1937, Hays came to San Antonio and held the rank of Ranger Captain within three years. He built a reputation fighting Mexican bandits and Indians, and his bravado was too much for an outlaw or a hostile Indian. In dealing with persons who are a threat to Texas, Hays helped establish a Ranger quality – having rugged toughness mixed with reliance on the latest technology.

The Rangers and the Republic of Texas became the earliest customers of a New England gun maker, Samuel Colt, who invented a .36 caliber five-shot revolver, which the early Rangers used with deadly effect to defend the Texas frontier. Colt built his reputation on his weapons being used by the Texas Rangers. Samuel H. Walker, one of Hay’s men, made some suggestions for improving the pistol that Colt adopted during the Mexican War. Today, we know Colt as a famous gun manufacturing company.

Texas Ranger back then often served as volunteers, since the government’s offers of payment rarely comes to pass. In 1835, when the movement for Texas independence was about to boil over, a council of representatives created a “Corps of Rangers” to protect the frontier from hostile Indians. Since then, they were officially paid, and at first, their compensation was set as $1.25 a day. They were also to elect their own officers, and were required to furnish their own arms, equipment, and mounts.

In 1836, settlers rebelled against the Mexican government due to increasing dissatisfaction with the government and the suspension of immigration from the US. During this conflict, the Texas Rangers played an important role in covering the retreat of civilians from the Mexican army in the famous “Runaway Scrape,” provided valuable intelligence to Texas Army, and harassed Mexican troops. The men who rode in response to Col. William B. Travis’ last minute plea to defend the Alamo were the Texas Rangers who fought and died for the independence of Texas.

After independence, the debt-ridden government of Texas found that the Rangers were the least expensive way to protect the frontier from the threat of Mexican attacks and from the hostile Indians. During this time, rangers such as Jack Hays, Samuel Walker, Ben McCulloch, and William “Bigfoot” Wallace first established their reputations as frontier fighters.

In 1846, the United States and Mexico were at war, after Texas’ admission as the 28th state of the Union. Some Texas Rangers functioned as scouts, and they fought with such ferocity that they became known as “Los diablos Tejanos” or the Texas Devils.

For the next decade after the Mexican War, the Rangers mostly existed as volunteer companies. They rise when they are needed and disbanded when the work was done. Because the frontier protection of Texas after the Mexican War became the responsibility of the Army, the notoriety and the number of Texas Rangers dwindled. From this period until the civil war, the once formidable force of men was reduced to a less importance duty.

During the Civil War, frontier protection was given by a “Regiment of Rangers,” who eventually became part of the Confederate Army. The volunteer ranging company became the backbone of home front security. The members had a legal authority with the use of their pistols and rifles.

After the war, the Legislature passed a bill creating three Texas Rangers companies, but the bill to provide funding was not passed. Financial support for the law enforcement in the early 1870s was sporadic. For practical purposes, there were no Texas Rangers operating for nearly a decade. During this time after the war, law enforcement was handled by a highly political organization known as the State Police. Texas was in the throes of reconstruction, so any authority, military or civil, was distrusted. The State Police was eventually disbanded.

By the end of Reconstruction, the urgent need for law and order resurfaced. In addition to the resurgence of pillaging by Mexican bandits and continued threats of Indians on the western frontier, a new threat to Texas appeared – the lawless Texans.

By the end of the 1870s, as tribes were forced out of Texas, the frontier seemed secure and the Indian threat has largely disappeared. In 1900, a court ruling determined that Rangers are granted full police powers, including the authority to make arrests. As a result, the force was abolished and reorganized the next year.

Since the Mexican War days, the Texas Rangers had occasional work to do along the Rio Grande, but the emphasis on the river increased in 1910 when the outbreak of revolution in Mexico happened.

Bandit raids from both sides of the Texas border quickly escalated to guerilla warfare. In 1916, the United States sent a large military force in pursuit of Pancho Villa, who raided New Mexico. Texas responded by raising Ranger companies, allowing mass inductions and the overnight creations of new Ranger companies.

However, the lack of training of the new Rangers became evident. The poor command structure and vigilante nature of the new Ranger units led to incidents unacceptable to the experienced Rangers. Some serious crimes were committed by some of the rangers that led to the 1919 Canales Investigation. An entire company was dismissed due to a retaliatory Ranger raid in Mexico. And in one battle, about 20 Mexicans may have been killed by Rangers who crossed the Mexican border.

The 35th legislature created a “Loyalty Ranger Force” to serve as a secret service for the State. The Loyalty Rangers were tasked to brief the Adjutant General on any activities concerning Mexican revolution outside of San Antonio and in the border counties in Texas and Mexico.

In 1919, a legislative investigation was demanded for the conduct of various Ranger forces during 1915 to 1917. The investigation resulted in the reduction of the Ranger force to four companies. Also, the qualifications for the Texas Ranger service was tightened, leading to its initial professionalization.

When the national prohibition law was passed in 1918, Rangers, along with federal officers had another problem to face on the border. Many bootlegged liquor from Mexico was intercepted, and shootouts between smugglers and Rangers were frequent.

During World War I, the already large Ranger force was supplemented with additional 400 Special Rangers appointed by the governor. After the war, the legislature reduced the size of the force to four companies of 15 men, plus a sergeant and a captain. Also, the lawmakers authorized a headquarters company of six men under a senior Ranger captain.

After the war, Texas was in a state of transition, and so were the Rangers. They still rode the river on horseback, but they also used cars. As the automobile was taking over horses as the principal mode of transportation, the increased national demand for petroleum caused a new law enforcement problem for the Rangers. In addition to their usual duties and the enforcement of prohibition, the Rangers also had to deal with the lawlessness that came with the oil boom in the state.

That time, the small Eastland County town of Ranger (aptly named because it has been settled near the site of an old frontier Ranger camp) discovered oil in the area. Ranger had a population of 16,000 people by 1920, and a substantial number of those residents were not interested in abiding the law. Rangers who were sent to Ranger raided gaming halls, corralled miscreants and felons, and smashed drinking establishments. When people from Ranger filled the jails, some prisoners had to be handcuffed to telephone poles.

The same story would be repeated throughout the ‘20s and the ‘30s – with only the names of towns changed. The Texas Rangers were effective in preserving the peace and dignity amidst the wild oil field boom towns.

As the automobile replaced horses, the Rangers had greater mobility, but so did the outlaws. Because of this, Rangers were given railroad passes, but they had to provide their own cars.

In 1934, the Texas Senate formed a committee for investigation of crime and law enforcement in the state. The committee produced a report that was critical of Texas law enforcement, but proposed a solution: the creation of a law enforcement agency known as the Department of Public Safety.

Under the agency, the Texas Rangers would be transferred from the Adjutant General’s Department. Also, Highway Patrol would be moved from the Highway Department to create a single state police force. The bill to introduce the agency became effective in 1935.

Under the Department of Public Safety, the Texas Rangers would consist of 36 men. Though it was a smaller number that it had been in recent years, they would finally have the benefits of political stability, improved communications, and state-of-the-art crime laboratory. With the creation of DPS, the Rangers’ tradition is matched by professionalism.

The Texas Rangers went on to be further modernized throughout the years. They are still investigating crimes from cattle thefts to major felony crimes. But the early Texas Rangers wouldn’t imagine the advanced training and level of technical expertise a man has to undergo to be an official Texas Ranger.