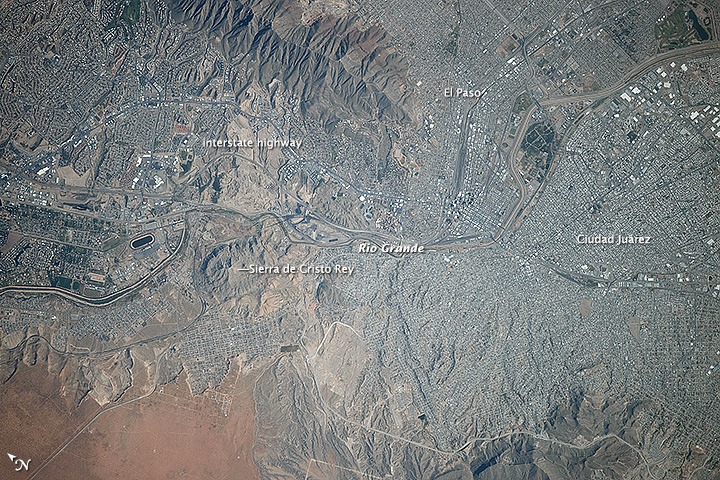 The transborder metroplex of El Paso-Juárez lies on the border between the US and Mexico. The two main cities of El Paso, Texas, US and Juárez, Chihuahua, Mexico, along with smaller surrounding regions, form a combined international metropolitan area. Las Cruces, New Mexico, is often also considered part of the region.

Besides Las Cruces, some suburbs like Fabens, San Elizario, and Socorro and several small communities like Canutillo, Chaparral, Horizon City, and Westway are also included in El Paso-Juárez. After the San Diego-Tijuana conurbation, it is the second-largest binational metropolitan area situated on the Rio Grande (US-Mexico border). It has a total population of approximately 2.7 million.

The first European explorers to arrive at the Rio Grande near the modern El Paso-Juárez did so in the year 1598 and celebrated the first local Thanksgiving Mass. In 1659, the present-day Juárez was founded south to the river by Spanish conquerors. The bulk of the regional production was constituted by the flourishing vineyards and fruits owing to the vast grasslands.

The Spanish authorities were continuously attempting to expand agricultural production to the north of the river, where the present-day El Paso is situated. However, the presence of the Apaches across the river prevented any significant development. After the Pueblo Revolt of 1680, the Spanish government made El Paso its temporary base, marking the first modern settlement of El Paso.

Since the early 18th century, both cities have largely functioned as a single community. With the arrival of the Texas and Pacific, Southern Pacific, and Santa Fe railroads in 1881, the area saw a substantial increase in trade with the US. However, this also attracted a diversity of newcomers, including priests and gunslingers, which resulted in a great deal of lawlessness and vice.

During the 1910s, the US Department of Army greatly brought down the vice businesses in El Paso, resulting in a sudden increase in tourist activity in Juárez. In the 1930s, the Great Depression resulted in a population decrease in the area. This, however, was compensated for by the military expansion after the Second War and new oil discoveries made in the area.

The mid-20th century once again saw a sudden redevelopment in El Paso-Juárez due to the high wages and low costs of living. The area attracted numerous businesses that soon symbolized manufacturing factories as its most important feature. Today, it is considered the second most valuable trade point on the border and the 14th largest trade center in the US, having a worth of $81 billion in trade in 2018 Situated on the northern side of the river, El Paso is the second-largest region in the Borderplex after Juárez and the 22nd largest one in the US. The city is home to the only medical research and care provider in West Texas. It maintained its position as one of the top three safest cities in the US from 1997 to 2014, as well as the safest city in the world from 2011 to 2014.

The chief manufacturing factories in El Paso are those of clothing, food, construction material, plastics, and medical equipment. As it is the second-busiest international crossing point, tourism earns the city over $1.5 billion a year. El Paso is home to more than 70 Fortune 500 companies, as well as several publicly traded companies, including personal care, public utilities, and petroleum-refining companies.

The Army makes a significant contribution to the economy, providing $6 billion annually due to the presence of Fort Bliss, Biggs Army Airfield, and WB Army Medical Center. Call center operations employ over 12,000 people and are one of the fastest businesses in the area. El Paso’s school districts employ over 19,000. A 2010 study showed that each year the University of Texas at El Paso (UTEP) has an impact of $417 million on local businesses.

UTEP was ranked the 7th best university in the US in 2013, just behind Stanford. El Paso also has other public universities and colleges, as well as the Paul L. Foster School of Medicine. Many students attend the New Mexico State University due to its proximity and in-state tuition for County residents. The El Paso Community College and Doña Ana Community College serve most of the area.

Most younger students attend public schools, which are divided into four districts. However, several private preparatory schools and academies are also available, including Catholic, Christian, and Jewish affiliates. The El Paso Public Library is the only public library in the region and has 12 different branches. It offers a bookmobile, a mobile computer classroom, and a Kidsmobile. Ciudad Juárez, historically known as El Paso de Norte, is part of the Mexican state of Chihuahua, located on the southern side of Rio Grande. The city lies opposite to El Paso and is connected through four international bridges. Among these, the Paso del Norte International Bridge was built to honor the memory of the very first wooden bridge to cross the Rio Grande at El Paso, which was made over 250 years ago.

In the second half of the 20th century, the newly established maquiladoras saw steady population growth in the city. In 2010, the city had a population of 1,321,004, which was 11% greater than that in 2000. This amount also includes 99% of the Juárez municipality population.

Due to the ongoing Mexican Drug War, it was estimated that more than 230,000 people left the city in the 2000s leaving behind over 116,000 abandoned homes. However, as crimes have begun to decline, the population change is again on the positive. Almost a third of the current population originated outside the state of Chihuahua.

The city of Juárez consists of more than 300 maquiladoras or assembly plants, spread within and around the city. It has been absorbing industrial real estate space in greater amounts than any other North American city. Numerous renowned foreign companies such as CommScope, Electrolux, Flextronics, and Cardinal Health have established business operations in the area. El Paso is also the reason Chihuahua is included in the top five Mexican states with the most foreign investments.

The most prominent production plants include those of automotive and electrical products. However, several other industries, such as aerospace, medical devices, international telecommunications, and diverse appliance and consumer products industries, are also flourishing in the region.

According to a 2000 estimate, Juárez boasts one of the highest literacy rates in Mexico, consisting of a 97.3% literate population that is older than 15. The city has around 20 universities and colleges. The largest of these is the Autonomous University of Ciudad Juárez, which offers services in biomedical, social and administrative, architectural, engineering and technological sciences.

The education system of Juárez also offers some of the best facilities in Sports (involving over 30,000 participants) and Fine Arts such as Classical Ballet, Drama, and Music. Other institutes specialize in training people of all ages in fields such as coding, 3D printing, CNC routing and prototyping technology.

The El Paso-Juárez region forms a single community of more than 2.5 million people. From almost any point in El Paso, the neighboring city of Juárez can be observed on the other side of the Rio Grande. The area is home to numerous parks and revenues for outdoor recreation. Due to the criminal activity in Juárez, the government maintains tight schedules and regulations regarding cross-border travel.